From 25 to 27 January 2022, the 20th anniversary International exhibition of equipment for milk and dairy production DairyTech 2022 took place at Crocus Expo. The event was organized by Hyve.

For 20 years, DairyTech has been bringing together the professional community and developing the dairy industry. 192 companies from 17 countries like Turkey, Italy, France, Germany, Belarus, Poland, the Netherlands, and others showcased their equipment. The exposition doubled, and the number of exhibitors increased by 2.4 times. 25 companies took part in the exhibition for the first time. Key industry players like AVE Technologies, France Process, IMA Dairy & Food, Sfoggiatech, Alter, Antares Vision, Sig Combibloc, Kieselmann Rus, PROFITEX, Alfa L Service, and Stern Ingredients received awards: “For active participation”, “For many years of cooperation”, “For a productive presentation of the company at the exhibition”, and “For productive debut”. DairyTech hosted the art zone of the international charity project CowParade, where the famous street artist Kirill Joke painted several figures of cows, with which one could take memorable photos. 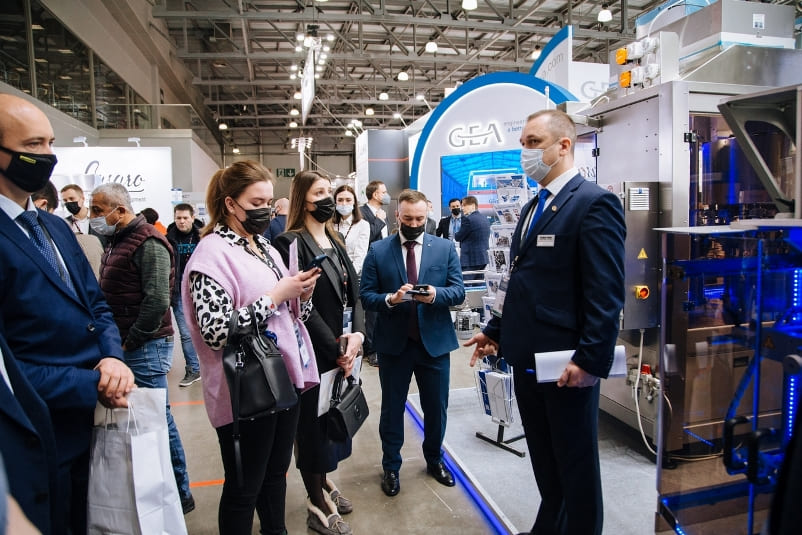 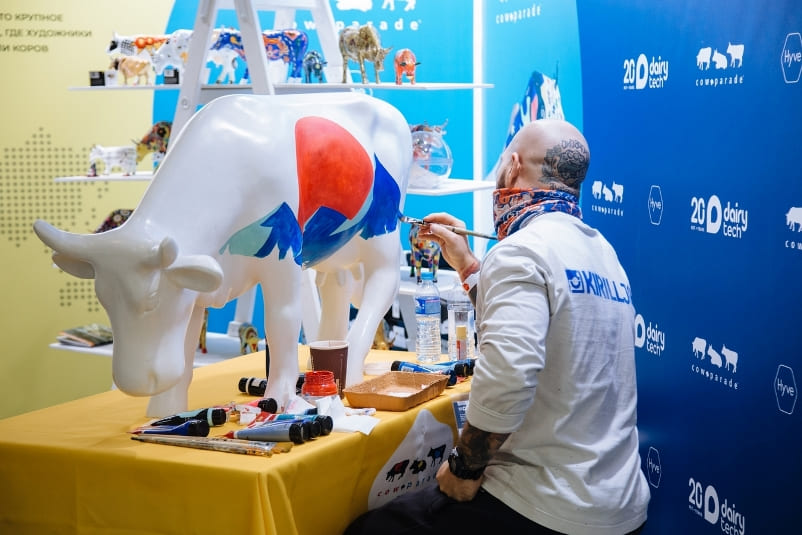 On 26 January, the award ceremony of the Dairy Industry Innovation Contest took place. The event made its comeback at the anniversary edition of the DairyTech business programme, and it will be held annually from now on. The competition aims at drawing attention to innovative companies that develop promising products, technologies, and projects.

The winners by categories: 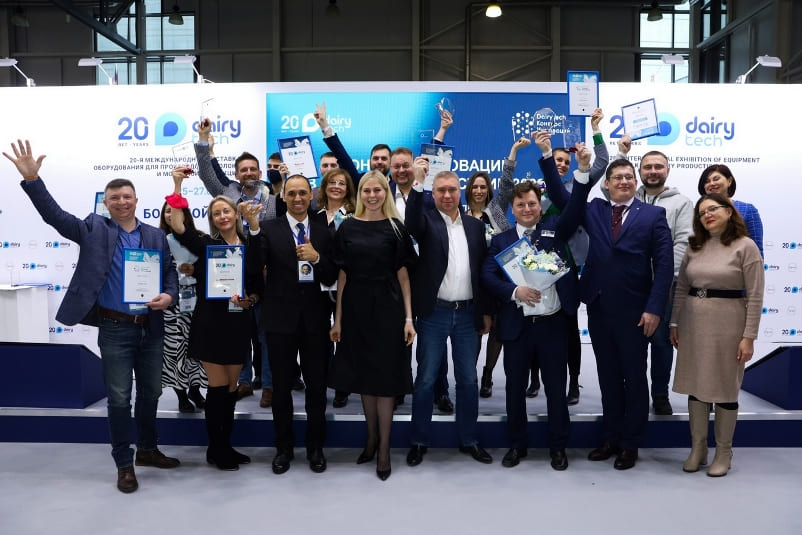 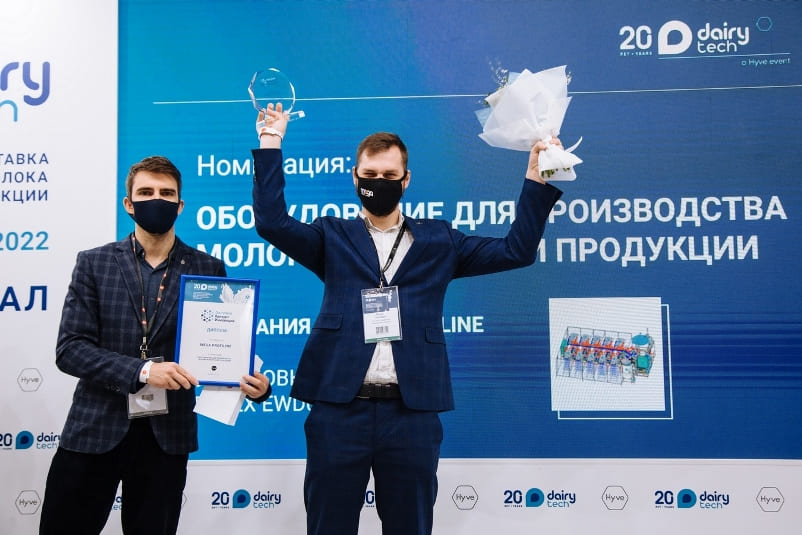 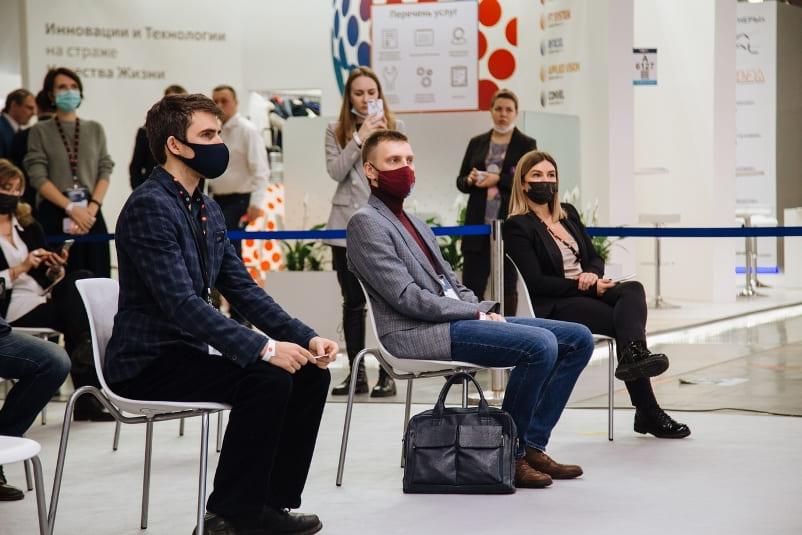 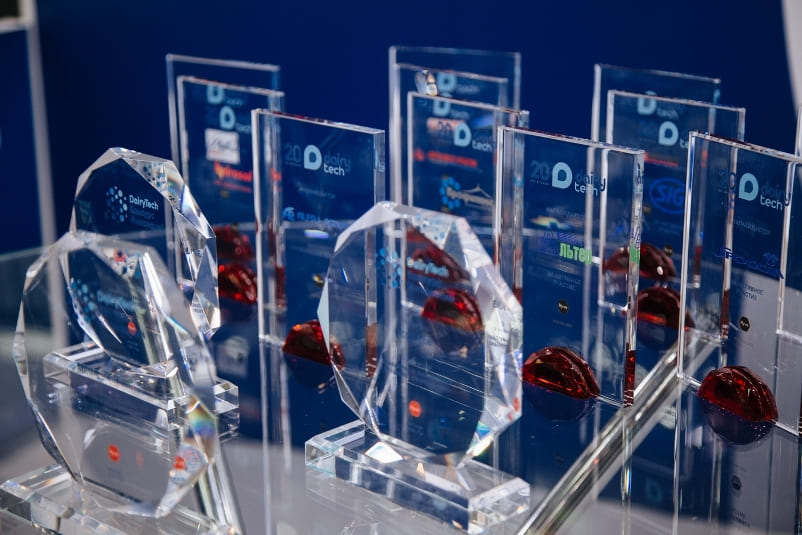 Official delegations at the exhibition

On 25 January, Vladimir Ivanovich Kashin, Chairman of the State Duma Committee on Agrarian Issues, took part in a VIP tour. Yulia Markova, director of the DairyTech exhibition, led the guest through the stands of domestic manufacturers.

On 26 January, a delegation of the Ministry of Industry and Trade of Russia headed by the Director of the Department of Agricultural Food and Construction and Road Engineering Maria Elkina visited the exhibition. The delegation got acquainted with dairy equipment, packaging complexes, and cooling units.

On the same day, a meeting of the French delegation of the Auvergne-Rhone-Alpes region with Hyve CEO Dmitry Zavgorodniy took place. Both sides showed interest in building productive cooperation. After the meeting, the delegation led by Philippe Meunier, Deputy Vice President for International Relations of the Auvergne-Rhone-Alpes region, visited the French exhibitors of DairyTech 2022. 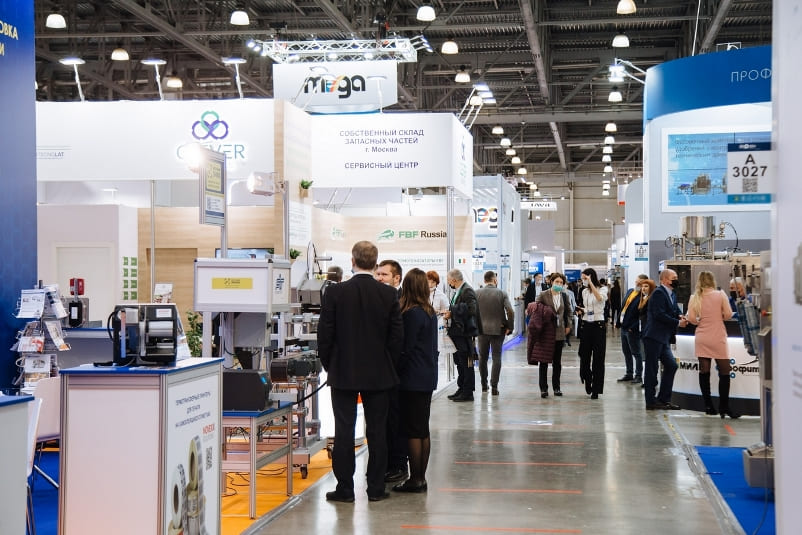 DairyTech 2022 hosted 13 content events with 80 speakers. 450 delegates attended the events, which was 17% of the total number of visitors. The experts discussed current topics in the dairy industry and emphasized the importance of ESG initiatives. One of the sessions was completely dedicated to eco initiatives.

On 25 January, the session on trends and analytics became the starting event. The speakers shared their views on the trends and challenges of the dairy industry in 2022. Alexey Gruzdev, partner of Streda Consulting, said that the Russian market was focused on domestic consumption, and demand in 2021 began to decline. He stressed that exports were actively growing, and it would become a market driver in the following years, along with the import substitution and domestic consumption. Artem Shimanov, Head of Market Analysis and Consumer Research at PepsiCo in Russia, devoted his speech to the global indicators of the dairy industry market. In his opinion, the highest rates of development in the world dairy market were observed in plant-based alternatives to milk.

The plenary session on digital marking began with a welcoming speech by Vladimir Kashin, Chairman of the State Duma Committee on Agrarian Issues. He thanked the exhibitors and organizers of the exhibition for contribution to the development of the dairy industry. “In many areas we have good positions”, Vladimir Kashin emphasized, speaking about the world positions of Russia in the dairy industry. The experts talked about the experience of implementing digital labeling, the problems of developers and retailers with that system, and the timing of introduction of piece-by-piece accounting of products. During an online speech, Vladimir Skvortsov, Deputy Director of the Department of Food and Processing Industry, shared plans to support the Russian dairy industry. The speaker said that the state provided support to companies in the implementation of labeling. He also emphasized that the first three stages of labeling were completed, but many issues could be discussed. 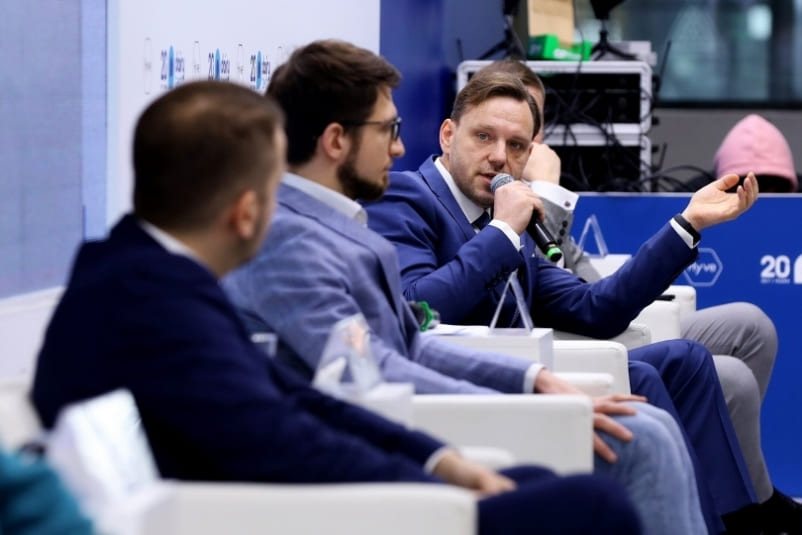 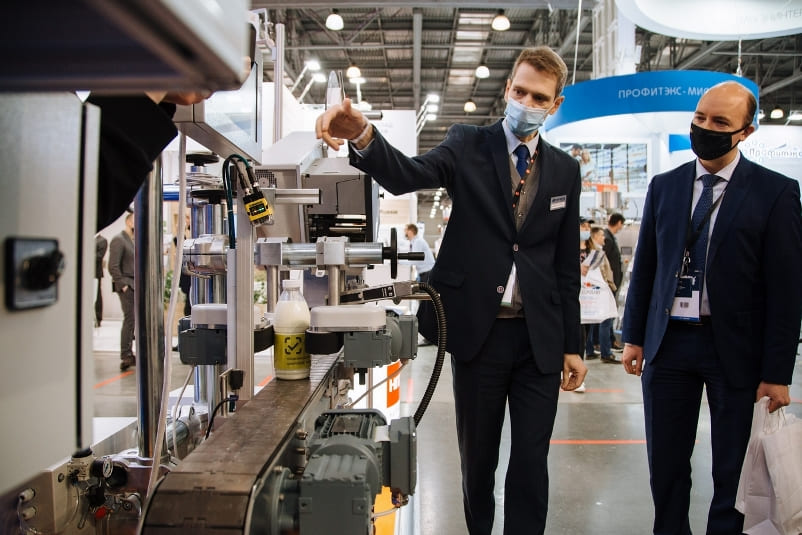 At the “Branding and Rebranding” session, industry experts shared successful cases of brand promotion. New channels appeared, and a “virtual” shelf became important for sales. Packaging took on a new role and sales became more personalized. Maria Volkova, a representative of the V-brand marketing agency, spoke about attraction of buyers from generation Z to the dairy category. The expert believed that young and active people needed more “fashionable” milk. Sergey Filippov talked about the competitive advantages of Perekrestok private label, the share of which the company planned to increase. He noted that the new value for the consumer was the “green” trend.

On 27 January, Artem Belov, General Director of Soyuzmoloko, started the cheese session “Assortment, sales, and development”. Jeremy Thien, President of Auvergne-Rhône-Alpes Gourmand, and Jean-Claude Rabany, President of the Regional Interprofessional Center for the Dairy Economy of the South East (CRIEL), made a welcoming speech. “France is well represented at the exhibition, and our task is to support our manufacturers,” said Jeremy Tien. The speakers also spoke about the importance of environmental initiatives. The eco-agenda became increasingly important for consumers. 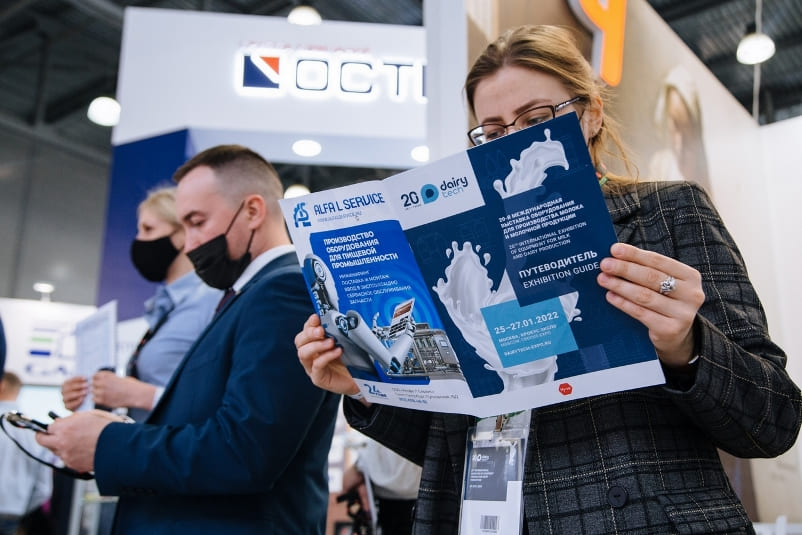 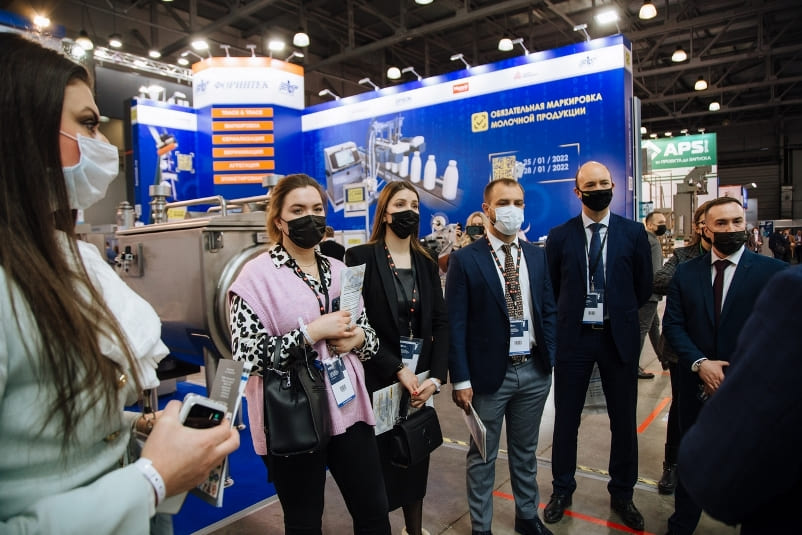